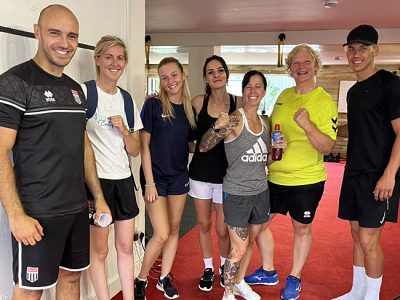 As all the Lionesses were preparing to face Germany in the Euros final, the Bath City Women were gearing up for their season by being put through their paces in a strength and conditioning session run by Joe Raynes at his gym Rejuvenate. After some warming up exercises, Joe, who was the Manager’s Player of the Season last season for the men’s team, devised a number of circuits for the players, focussing on developing their core strength. They finished the session by stretching and as Joe explained his pre and post-match routine.

Bath City Women Head Coach Matt Abreu said, “I was impressed with how the women gave it their all this morning. That wasn’t an easy session but Joe made it fun and was so encouraging, that everyone came away having enjoyed it. We’ll be back on the grass doing football training on Wednesday but it’s all coming together nicely.”

The session came a couple of days after the squad found out that they have been placed in Division 1 of the Somerset County Women’s League. This is the top division in Tier 7 and will see them face opponents such as Pen Mill Ladies, Wells City Ladies and Wellington Ladies. The season will begin on September 4th with fixtures to be announced shortly, together with details of how fans can attend. On announcing the news to the players, Matt said, “Fantastic news everyone, we have been officially placed in Division One. It’s where we want to be and we are ready for it – bring it on.”

Bath City Women will play their home games at Twerton Park and they are supported by founding partner Novia.Let’s get behind the team and make this first season a memorable one. Thanks to the Lionesses, football came home this summer, and now it’s coming home to Twerton Park!