A three-minute double salvo from Exeter sunk Bath City – who saw last season’s penalty hoodoo return in their second pre-season outing. It was three quickfire goals from Bristol City that sunk the Romans on Tuesday evening and again they were undone by successive strikes, Jake Taylor and Ryan Harley bagging the Grecians’ goals. But it could have been City in the lead had Billy Murphy not seen his poor penalty repelled by stooping James Hamon.

Among the changes to the City team were a start for trialists Matt Cafer in goal and Toby Ajala on the right flank, as Jamie Lucas and Nat Jarvis came in to form a new partnership up top. And on the bench there was an appearance for Harrison Bennett, a teen midfielder released by Reading this summer. A young Exeter outfit began on the front foot, with initial efforts coming from Matt Jay, blocked out after Archie Collins pulled away from Anthony Straker, and a Ben Seymour flick that flew across the face of goal and wide. Lucas had City’s first effort of the evening, an awkward, hooked shot that bounced softly into Christy Pym’s breadbasket. Largely, however, it was Exeter creating the chances until the closing stages of the period. Jay scuffed a low shot into Cafer, who then saved a bullet header from Jordan Tillson without having to move. A misplaced Naby Diallo pass allowed Jack Sparkes to whip one wide from range as Cafer scrambled, and Seymour curled another strike into the keeper’s chest from 20 yards. But the Romans picked up towards the end of the half. Andy Watkins nearly set Jarvis free in the box as Pym sprinted from his six-yard box to snaffle the loose ball. Murphy also tried is luck following a tidy string of passes from the hosts, but could not truly test Pym.

The Grecians made a raft of changes at the interval and one of those to enter the fray, Taylor, was denied the opening goal by a scrambling City block. It was the hosts, however, that passed up the golden opportunity to break the deadlock. Half-time substitute Marvin Morgan had a shot blocked as he struggled to get the ball out from his feet. But the rebound fell for George Rigg, who was caught on the follow through of his effort – held by Hamon – to earn the penalty. The penalty curse that cost the Romans so many points last term followed them into pre-season as Murphy went low and central to give Hamon ample opportunity to pull off the save. Coming on just before the hour, Bennett’s first major moment saw him lift a ball into the right-hand channel for Nick McCootie to chase down. The striker bustled his way into the box and down the byline, drawing a save out of Hamon from an acute angle. Watkins was next to be denied, this time by a defender’s leg after being slipped into the box by a smart through ball, as the home side began to get more of a foothold in the game. Eventually, however, the visitors recovered their composure and went ahead when Taylor finished coolly from Liam McAlinden’s neat flick on the edge of the box. A flowing Exeter move was kept out by Cafer, instinctively dropping to his left to keep out Taylor, but the second did come soon enough. It was Harley that bagged it, bunting a volley into the ground, leaving Cafer and his defenders stood statuesque to watch the ball loop into the top corner. The on-trial right-back Christopher denied them a third. James dinked the ball in for Taylor, whose close-range effort was knocked behind by a Christopher backheel. Cafer had one last opportunity to impress City chief Gary Owers before the game was up, trapping a Reuben Reid shot with his feet. 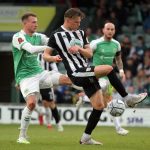