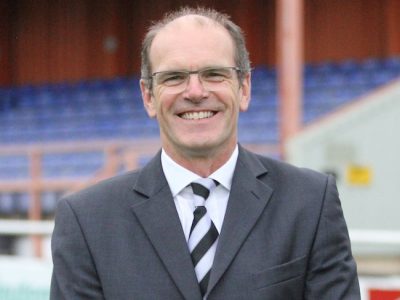 Now the season has drawn to a close, it’s a good time to reflect on the past ten months.

On the pitch we have seen a good turnaround in performances and results over the last two months of the season. As more of the squad have returned to fitness we have got some continuity back and draws, and then wins, have brought more confidence back and seen our true colours shine through again.

Jerry, Andy and the players also adjusted some of their thinking and methods to freshen things up and we have learnt through some of the tougher times this season about how to set things up better heading into the summer and the new season.

Your support for the club has been truly amazing and so vital when times have been tougher than we’ve been used to. Our average league crowd of 1,145 is the highest since 1977/78 and we were thrilled to see so many of you enjoy the final game of the season for the “Big Bath City Thank You”.

As ever, but especially at the end of the season, another really big “thank you” to all our volunteers and the small “army” of people who keep the Club going through the year, front and back of house, seen and unseen. We all truly appreciate your help and commitment and we would not be able to run this amazing club without you, so as well as my personal thanks I would like to add the official thanks of the Board to you all.

Off the pitch we still manage to help some of the less advantaged around Twerton and further afield, especially via the Bath City FC Foundation, that does tremendous work in the community, focusing on children and younger people.

The redevelopment project is still making quiet progress behind the scenes, and we will be able to provide an update once we have something more concrete to say in the coming months.  We all recognise the ground and surrounding area need investment and some “tlc,” so bear with us as we need to get this next step right.

Sadly, Joy Saunders is stepping down as our Community Director soon as her “day job” has become more demanding. So, another big thank you from the Board for all her help. The good news is she is staying involved on the Redevelopment Working Group where she has added so much in the last year especially. And of course a massive thank you to Bob Chester who is stepping down after ten years as Commercial Manager, and raising huge amounts of money for the club. Bob is happily staying involved in a number of ways – including the post-match interviews, but able to take a well-earned rest for the next couple of months.

Thank you again and enjoy the summer!