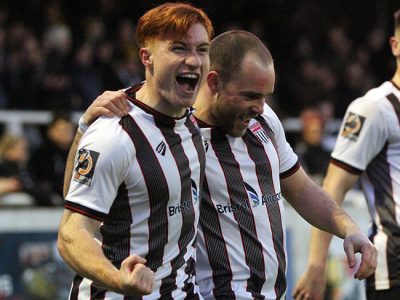 City overcame dogged resistance from Hemel Hempstead Town at Twerton Park this afternoon to secure a 2-0 win thanks to late strikes from Tom Smith and Ross Stearn – his 50th goal for the Romans. After an early scare when Alex Hartridge had to be alert to deny Ashford a tap-in following a mistake by Ryan Clarke, City began to gain the upper hand. Smith flashed a shot narrowly wide before Frankie Artus headed the ball home only for the referee to disallow the goal for a push by the midfielder. City were almost caught out on the break in the final minute of the half and the opening stages of the second half were more even as the Tudors started to pose more of an attacking threat. It was City who again had the ball in the net just before the hour mark but Artus’ strike was again ruled out, this time for a push by Ryan Brunt in the build-up. With these two disallowed efforts it looked as if it would be a frustrating afternoon for City but the introduction of Stearn on 76 minutes finally turned the game in their favour. Within a minute he won a free-kick right on the edge of the box which Tom Smith blasted through the wall into the roof of the net. Then five minutes later he pounced on a poor clearance from Beasant to race forward and curl a shot past the stricken keeper, reaching his half-century of City goals in the process. Louis Britton and Brunt could have added to the scoring after this but it was another vital win for second placed City, keeping in touch with leaders Wealdstone ahead of their visit to the Stones next Saturday.