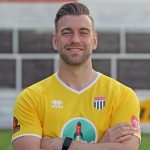 Goalkeeper Will joined City in July 2021 and a trial period with the Romans. He began his career at Ipswich Town Academy before being released at the age of 16 and moving onto Salisbury City for two years. The 28-year old joined Cardiff Met Uni, then playing in the fourth tier of Welsh football, in the summer of 2011. He went on to spend ten seasons with the club, making over 250 appearances and helping them to three promotions in four years to reach the Welsh Premier League. He was also the penalty shoot out hero in 2019, saving three spot kicks in the win over Bala Town, to see the club qualify for the Europa League preliminary round.