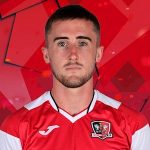 Will, who has made seven appearances for the Exeter City first team, joined City on loan in November 2020 have spent time at Truro City last campaign. He made his first-team debut for Exeter City as a substitute in the Checkatrade Trophy defeat to Chelsea under-21s in the 2017/18 season. Will can play in central defence or midfield.