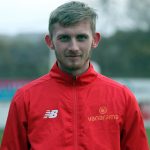 Midfielder Tom is the son of Bristol Rovers legend and former City striker David Mehew. He first joined City on loan from the Pirates in November 2020 having come up through the League 1 side youth ranks. During his time there he earned a lot of praise and was U18 Player of the season for the 2018-19 season. He made his senior debut for Bristol Rovers on 8 September 2020 against Walsall in the EFL Trophy, and scored his first professional goal in the process. Three days later on 11 September 2020, Mehew signed a new two-year contract extension with an option for a further year. He returned to Twerton Park for a second loan spell in October 2021.