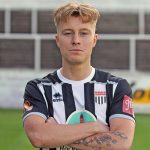 Midfielder Tom is now in his third season at Twerton Park having signed for the Romans in August 2019 after a successful pre-season trial. The 21-year-old midfielder had been part of Bristol City U23 development squad and spent time on loan at Truro City before joining City.