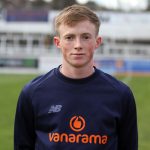 Highly rated left-sided defender Ryan joined City on loan from Bristol Rovers in February 2022. He joined Rovers in October 2020 on a 3-year deal from Weston Super Mare, returning on loan to the Seagulls for the rest of the 20/21 season. The 19-year old made his debut for Rovers in an EFL Cup tie against Cheltenham Town in August 2021.