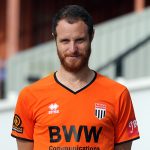 Bristol-born Ryan began his career with the red half of the City but made just two first-team appearances for the Robins and, after a loan spell at Forest Green Rovers, he joined Weston Super Mare in October 2006. Just over a year later he joined Exeter City and helped the side return to the Football League via the play-offs in May 2007. He went on to play over 200 games for the Grecians during three spells. The midfielder also played for Brighton & Hove Albion, Milton Keynes Dons and Swindon Town during a long and successful professional career. The 35-year old joined City in September 2020.