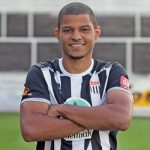 Jamaican international midfielder Omar joined City in June 2021 from National League North side Darlington. He began his career playing college soccer at the University of North Carolina. He spent three seasons with the Tar Heels, making 59 appearances and scoring five goals, during which time he also played with Portland Timbers U23s in the USL Premier Development League. Omar was then drafted in the first round of the 2016 MLS SuperDraft (5th overall) by Real Salt Lake. He spent a season the Utah-based club, also turning out for their reserve side Real Monarchs. In January 2018 he joined USL side Bethlehem Steel but was released at the end of that season. After a brief spell with Spanish side San Roque de Lepe he joined Darlington in March 2019. The 2019/20 season saw Omar secure a regular starting place with the Quakers and, after initially turning down a new deal, he remained in the North East for the curtailed 2020/21 season. However, a move to Bristol this summer to be nearer his fiancé saw him make the Twerton Park switch.