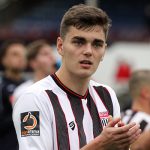 19-old year old central defender/midfielder Ollie joined City on loan from Colchester United in October 2019. He came up through the ranks of his hometown club, signing his first professional contract in May 2018, making his first-team debut in November that year. Ollie also spent three loan spells with Maldon & Tiptree in the Isthmian League North Division during the 2017-18 and 2018-19 seasons.