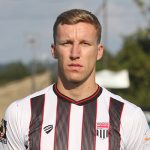 Towering defender Matt joined Cheltenham Town in 2010, signing his first professional contract on July 2016. He had a loan spell with Cirencester Town just before this and then spent two loan spells with Weston Super Mare during the 2018-19 season. On his release from the Robins in June 2019 he joined City.

Click here for a gallery of Matt Bower pictures