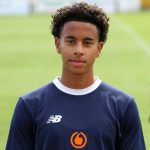 Australian born left-sided attacking player Marlee joined City on loan from Bristol City in August 2021. He moved to England aged eight where he joined the Academy at Fulham. He left the West London side’s youth setup at 16 before he was snapped up by the Robins and later awarded a scholarship. Marlee signed professional terms with City in March 2021 on a two-and-a-half-year deal.