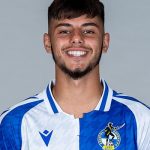 Attacking midfielder Lucas joined City on loan from Bristol Rovers in October 2020. He joined Rovers academy at the age of 10, working his way up through the ranks before signing his first professional contract in May 2019. He made his first team debut for the Pirates in September that year and also became the first player born after the Millennium to play for the Gas in the league, when he came on against Ipswich Town in a 2-1 win in December.