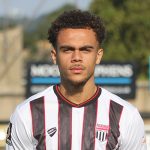 Jordan joined City in June 2019 after he was released by Forest Green Rovers. Son of former Swindon Town and Manchester City midfielder, Fitzroy Simpson, he joined his hometown club at the age of six and worked his way up through the junior ranks before signing a professional contract in March 2017. However, he left the County Ground in July 2017 to join Forest Green. The midfielder then spent loan spells with Hungerford Town, Havant & Waterlooville and Hampton & Richmond Borough during the next couple of seasons.

Click here for a gallery of Jordan Simpson pictures