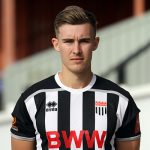 Midfielder Jason joined Exeter City’s academy in 2003 and progressed through the ranks before signing his first professional contract in April 2014. He made his first team debut in October that year then joined Weston Super Mare on loan in July 2015. The 25-year old was released by Exeter a year later and joined Weston permanently, where he spent three successful seasons. He moved to Hereford in June 2019. Jason joined City in September 2020.