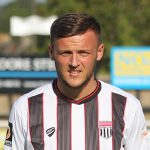 Midfielder Harry joined City on a six-month loan deal in July 2019 from Southampton. The 19-year old joined Saints Academy at the age of eight through local development centres and progressed through the youth ranks to make his under-18s debut for the club as a schoolboy during the 2015/16 season. The 2018/19 season saw Harry regularly feature for the Saints U-23 side.