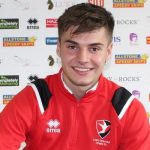 Defender Grant Horton joined City on loan from Cheltenham Town in November 2020. The Hereford based teenager has progressed through the academy set-up at the Robins from a young age before signing his first professional contract in the summer of 2020. During the second year of his scholarship with the under-18s he made his Football League debut as a late substitute in a 3-0 win at Mansfield Town in December 2019. He spent much of the 2018/19 season on loan in the Midland Premier League with Worcester City and started the 2019/20 campaign on loan in the Southern Premier Central with Bromsgrove Sporting. In September 2019 he signed for Yate Town on loan in the Southern Premier South and impressed with his performances, earning himself another loan move to National League South level with Chippenham Town.