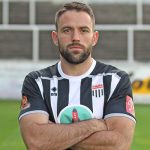 Eddie joined City from Chippenham Town in June 2021. A product of the Forest Green Rovers academy, he captained their under-18’s to a league cup win in 2009 before signing for Gloucester City in 2010. The opportunity to move and play football in America proved too good to turn down and he moved to play for Major League Soccer (MLS) side DC United in 2011, where he was a regular for their Under-23 side. In 2012, Eddie was selected for the Wales University squad for the home nations tournament and he went on to win a runner-up medal as well as earning the honour of representing the Great Britain Universities side. He then undertook another transatlantic journey to study at the University of Dayton, where he captained their soccer team and was awarded the ‘Most valuable player’ award for the league. After his time at Dayton, Jones played for Ottawa Fury and FC London in Canada, both professional North American Soccer League sides, before short spells at the Evergreen Diplomats and IFK Maryland in the recently formed American Soccer League during 2015. On his return to the UK in 2016 he enjoyed spells with Solihull Moors and AFC Telford before joining Oxford City in the summer of 2017. After three seasons with the Hoops the 30-year old move onto Chippenham Town for the 2020/21 season.