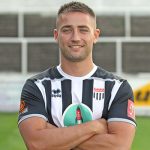 Now City’s longest serving current player, defender Dan was a product of Bristol City’s Academy and signed a professional contract in July 2010. Although he suffered a number of injury problems he twice had his contract at Ashton Gate extended before being released in May 2012. After joining City on trial that summer Dan old impressed sufficiently to be offered a one-year deal at Twerton Park. He soon secured a regular starting XI place and has since been one of City’s most consistent and impressive players ever since, both at full back and in the centre of defence, picking up the player of the year award for the 2015-16 season. He has now played well over 250 games for the Romans.