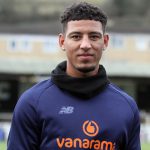 22-year old full-back Callum joined City on loan from Exeter City in January 2022. Callum came up through the youth ranks at Aston Villa and was part of the young side that faced Liverpool in the FA Cup in January 2021 after a COVID outbreak at the Midlands club. Shortly after this he joined Hereford FC on loan. At the end of the 2020/21 he was released by Aston Villa and joined Exeter City. Prior to joining City he has a loan spell with local rivals Chippenham Town.