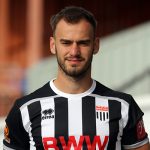 A graduate from Manchester United’s academy, Callum’s first professional club was Barnsley, who he joined in July 2015. He was loaned out to Macclesfield Town the following month. He joined Forest Green Rovers in May 2017, from where he was loaned out to Torquay United four months later. He returned on loan to Macclesfield Town in January 2018 and helped the club to win promotion into the English Football League as champions of the National League at the end of the 2017/18 season. He joined Macclesfield permanently in May 2018, before moving on to Port Vale in July 2019. He was released at the end of the 2019/20 and joined City.