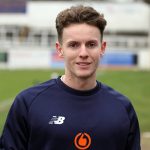 Ben joined City on loan from Exeter City in January 2022. The Watford born forward came up through the youth ranks at Exeter, signing his first professional contract in April 2017. He spent loan spells with Weston Super Mare, Bideford, Gloucester City and Dorchester Town, before making his first team debut for the Grecians in an EFL Cup tie against Coventry City in August 2019. He has now made over 50 appearances for Exeter and also spent a short loan spell with Yeovil Town earlier this season.