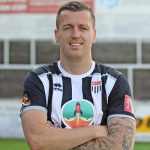 Ben started his senior career with Weymouth back in 2010, after leaving boyhood club Plymouth Argyle. He then spent spells with a number of non-league clubs, however, it was only after earning a switch to National League club Torquay United in October 2015, that he truly began to establish himself. He spent the best part of two seasons with the Gulls, twice helping the club steer clear of the bottom four with a late run of form, However, loan spells at Truro and Weston-super-Mare restricted his game time at Plainmoor and a permanent move to Cornwall followed in the summer of 2017. A successful season saw the White Tigers finish in seventh place and earn a National League South play-off spot. A short-lived spell at Billericay Town followed at the start of the 2018/19 campaign before he joined up with Woking in October 2018. The 30-year old immediately became a rock at the heart of the Cards defence, helping the club to the FA Cup 3rd Round and promotion back to the National League in his first season. He enjoyed two more successful seasons at Kingfield Stadium before a change in training arrangements saw his depart the club and sign for City in June 2021.