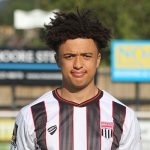 Right-back Ash began his career with Bristol City, progressing through the youth ranks at Ashton Gate. He spent the 2017-18 season on loan with Weston Super Mare and was released by the Robins during the summer of 2018. He switched to the blue side of Bristol but struggled with injuries with Rovers and in March 2019 returned to Weston. The 21-year then became City’s first signing of the 2019 close season.

Ashley is currently on loan at Cirencester Town.