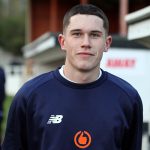 Zak joined City on loan from West Bromwich Albion in October 2021. Born in Ireland, he is a versatile left-back who has adapted to playing at centre-back as well after joining the Baggies aged 16. He was a regular in their Under-23 side last season and has represented his country on a regular basis throughout his youth development, playing for Ireland’s Under-16s, 17s and 18s.