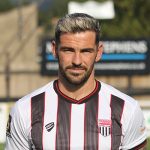 Forward Adam joined City in the summer of 2018 from Evesham United. He began his career with Gloucester City, coming up through their youth ranks before making his first team debut in February 2011. He was a regular starter on the left-wing with the Tigers during the 2011-12 and 2012-13 seasons. He then spent 18 successful months with Shortwood United – helping them to reach the FA Cup 1st Round and a live appearance on Sky Sports – before he returned to Gloucester in February 2014. He didn’t really recapture his previous form and after a loan spell with Evesham United he made a permanent switch in January 2015. It was there he found his goalscoring touch, netting 81 goals in 169 games for the Robins. Adam looked to headed for Swindon Supermarine in May 2018 before City gave him the opportunity to test himself at a higher level, which he fully took with a series of impressive performances.